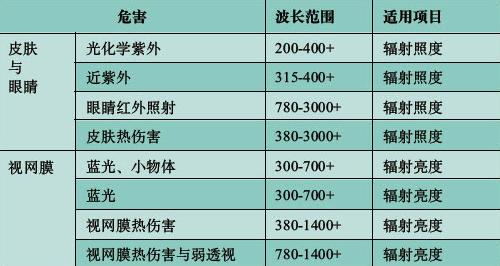 Lighting is faced with people, we must emphasize light efficiency, but we must first talk about the quality of light, especially for people's safety. â€”â€” â€œWith the improvement of LED light efficiency and brightness in the future, especially with the increasingly widespread use of LED, when the LED enters indoor lighting on a large scale, its security becomes more important,â€ perhaps because of this, The safety of the LED light source to human eyes and organisms is attracting attention from various countries at home and abroad.

It makes sense to think more about the potential impact of LEDs. Because of the narrow spectrum and high brightness of solid-state light sources, the bio-safety of lighting has caused some people to show "concerns." In the incident of "Yuba Eye-losing Eyes" reported by the media some time ago, the innocent Blu-ray was once again regarded as the "culprit" -- If we say that this is a "misunderstanding" that the public is not familiar with knowing about LEDs, then how should scientifically define the impact of LED light sources on the human eye in the end, and how to determine the safety of LEDs on different occasions? In particular, there is no recognized scientifically quantifiable standard for "health lighting" for LEDs that are being mass-produced and flowing into the market. The latter is obviously of great significance to the overall industry development and many manufacturing companies.

In fact, in terms of standardization and measurement of optical security, a great deal of research work has been done both internationally and domestically. IEC TC-76 and CIE D6 are revising IEC62471/CIE S009. IEC TC-76 is also drafting IEC62471 series of standards. The two annexes, including the fourth part of the guidance on measurement methods. On November 20th, 2012, at the report of the National Standardization Review and Standardization Work Meeting of the National Standardization Committee for Lighting Engineering R&D and Industry Alliance Committee (abbreviated as "CSA Standards Committee"), in the five industry standard assessments conducted, "CSA 019-led lighting The "General Specification for Product Inspection and Testing" also introduces for the first time an inspection test method for electric and electronic products to evaluate the quality of LED lighting products and standardize the quality evaluation system of LED lighting products, including the contents of "photobiological safety".

For LED "photobiological safety" issues, many domestic experts also expressed their views from their own perspective.

Professor Zhou Taiming of Fudan University stated that LED products below 4000K can be used with confidence. He mentioned to reporters that the current public is worried that LED will hurt the human eye because they do not understand it. Some experts may not even use it. The former chairman of the International Commission on Illumination also had a process for the use of LEDs. At the beginning, he also had doubts about LEDs. But now his attitude is very positive and he has done a lot of research work. He has an article called "The Quality and Energy Efficiency of Lighting Is Inconsistent." This document focuses on the effects of LEDs on human injuries. At the same time, calculations were made at the same time. The conclusion is that we can use the white LED with a color temperature of 2700K-3000K and a color rendering index of 80 or higher. The use of 6000K at home will hurt.

Designers who have been paying attention to this issue have also expressed their views. Xu Qinghui, the design director of Guangzhou Kebai Lighting Design Company and the council member of the Chinese Association of Lighting Designers, recently put forward his own views on classroom lighting in primary and secondary schools on its own Weibo: It is recommended that lighting in primary and secondary schools should not be replaced with LEDs; Even in schools using LED, it is recommended to use 4000K, do not use high color temperature; and recommended that families choose LED also do not choose over-white light color, should use warm white light of about 3000K; also recommended that children do not use the desk to read and write Led desk lamp, it is recommended to use 3300K tungsten halogen light source eye protection desk lamp. At the same time, Xu Qinghui revealed on his microblogging that the China Academy of Building Research is preparing to issue a strict regulation on indoor use of LED light sources in GB50034-2013 to be issued next year, one of which is that the color temperature must be lower than 4000K; At the same time, he pointed out that the architectural landscape lighting of Section 10.9 of JGJ 16-2008, which was issued for implementation this year, also stipulated clearly â€œto avoid using a light source with a color temperature above 6000K aloneâ€.

Dr. Chen Wencheng, a senior application engineer at OSRAM Opto Semiconductors Asia Application Design Center, said that there is no need to talk about the blue light and the discoloration. The proper blue light component has great positive significance for the body's biological clock adjustment. He believes that with regard to Blue light hazards, people should pay attention to the fact that the damage caused is not the blue light itself, but the energy it contains. You stare at the blue sky without any problems, but even if you look directly at the sun for a while, it may also cause retinal damage. The energy absorbed by the retina depends mainly on the light intensity and the time it takes to look at it, and it also has a certain relationship with the color temperature.

Lin Yandan, an associate professor of light and lighting engineering at Fudan University, believes that in the era of LED new light sources, we only grasp what people really need, grasp the characteristics of the spectrum and adjust the spectrum, that is, fully consider the radiation of light, and consider peopleâ€™s Visual and security needs to achieve a better and healthier lighting. She also reminded that not only lighting, Ipad mobile phones and other flash is basically a high-power white LED, blue light content, when the intensity and fixation time is sufficient, it may damage the retina, for young children, try to avoid close attention to the flash and each A blue and white LED glow toy to avoid high blue light transmittance of the lens.

In general, it is certain that the LED light source is safe as long as it follows the correct indicators, reasonable design, and appropriate application. For companies, the development of products should focus on optical design, attention to glare, color temperature, color rendering index and other indicators, in terms of light efficiency, light comfort, but also make different choices depending on the use of the environment. Another point of view, for the finished lighting manufacturers, can achieve the purpose of changing the physiological irradiation brightness by designing, by appropriately changing the distance between the LEDs, replacing more single high-power LEDs with more low-power LEDs.

Feyvan electronics offers a wide selection of high quality NTC thermistors. All thermistor material and chips are made in Jiangsu, China.

NTC thermistors and sensors are everywhere in our daily life and will have a wider range of uses in the future which have been used in automotive, household appliances, computers, medical equipment, electronic thermometer, digital thermostats, portable heaters, printer, air conditioners and refrigerators...