Hats are a common everyday item for many people. In addition to summer sunshade and winter warming, hats can also play a protective role in some cases, but a hat recently displayed at the TI DIY event. Not only can the LED light be automatically controlled according to the wearer's mood, but also can be connected to the wearer's social platform. When the social platform has new browsing or commenting, the LED light on the hat will remind the wearer by blinking. 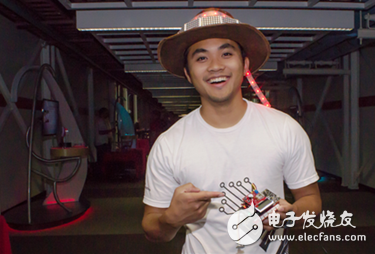 This DIY smart hat has received great attention after its exhibition, and it also provides a creative display platform for LED lighting technology and social media information. The Smart Hat uses both TI's embedded and analog components, including a range of LED drivers and a SimpleLinkTM Wi-FiÂ® CC3200 wireless microcontroller (MCU) that communicates via cloud interaction.

â€œWe know that social interaction is very important. Since we already have embedded microcontrollers that can communicate through those same social channels, we think it's very interesting to know more about the types of information on the cloud.â€ Adrian Fernandez, TI LaunchPad Development Ecosystem Manager Said.

Although Adrian is usually an optimist, the open source smart hat can show a series of changing emotions. For example, a green light means that people are sending happy messages, while a red light means sad messages.

â€œWith the help of sentiment analysis tools, we can understand people's moods at different times,â€ Adrian said with a smile.

This innovative smart hat was designed by Lee Goldberg, an editor at EDN Magazine, and Adrian and several other TI employees worked together to optimize and decorate the hat and participate in the 2014 Money Festival ( Maker Faire).

S-type Sensor adopts Cantilever shear structure, which has the characteristics of high measurement precision, good dustproof, easy installation, convenient use and so on.
Suitable for small range measuring force and control system. Matched with special transmitter, it can output various standard signals and directly supply PLC or computer.