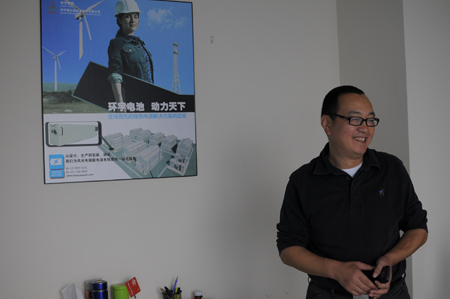 The Lithium Battery market is huge. According to statistics, by 2015, lithium battery capacity will exceed 5 billion Ah.

On October 21, Li Zhong Middle, chairman of Henan Huanyu Group, spoke bluntly in an interview. The goal of Universal was to become the top five lithium battery solution provider in the world.

Li Middle East said that the rapid development of domestic demand for solar cells, wind energy storage power stations and electric vehicle power batteries, makes the lithium battery market has the potential to expand indefinitely, and Huanyu is also developing and monitoring battery R&D in the efforts of two generations. Equipment, "did not say that it is the strongest in the country, but it is certainly one of the strongest in the country."

The market is huge With the rise in oil prices and the nuclear crisis in Japan, renewable energy sources such as new energy vehicles, solar energy, lithium batteries, and wind power have attracted investors' attention.

Li Zhongren introduced that solar energy and wind energy have been gradually falling from the West because of high costs and difficulties in power transmission. The investment advantages of new energy and lithium batteries have been highlighted.

Wang Xia, President of the China Council for the Promotion of International Trade Automobile Industry, stated that from 2010 to 2011, Chinaâ€™s auto production and sales increased from more than 2 million to 18 million, with an average annual growth rate of 24.2%, making it the worldâ€™s largest automobile manufacturer. .

At the same time, the huge resource consumption brought by the automobile industry, as well as energy and environmental pressures, have to be solved urgently. In contrast, the development advantages of electric vehicles are also highlighted.

This shift, in the year of the 12th Five-Year Plan, invariably points to new energy vehicles. The reporter understands that in the â€œTwelfth Five-Year Planâ€, the new energy automobile industry is defined as â€œthe leading industry of the national economyâ€ for the next 10 years. The central government will provide more than 100 billion yuan in huge financial support.

Huanyu Group is experiencing new development momentum in such an environment. Through nearly one year of communication and negotiation, in August 2010, Huanyu Group and UK-based Ou Rui Fund established Universal Solar Energy Technology Co., Ltd. in Beijing, and successfully realized the first-phase financing for the production and realization of lithium battery business development. The favorable conditions.

Capital Support At the end of August 2010, the announcement of a â€œGlobal Group and ERIC Capital to produce lithium batteries for electric vehiclesâ€ was of great significance to Henan Huanyu Group.

Li Middle East said that in the early stage of the development of electric vehicle batteries, large capital investment is very critical. With the wind investment of Euro-Europe, Huanyu also has more opportunities to â€œtake the leadâ€ in the field of lithium batteries for electric vehicles.

And Huanyu's preference for Oerlikon Capital is also due to the continuous development of its technology and the expansion of market size. Dong Linfu, Marketing Director of Beijing Universal Solar Energy Technology Co., Ltd. introduced that in 2002, Huanyu began to use lithium manganese dioxide as a power battery, and later discovered that lithium manganese dioxide power battery has many drawbacks. Then entered the lithium iron phosphate battery research. After two years of efforts, Huanyu lithium iron phosphate materials and batteries have been successfully developed. In 2008, Huanyu Lithium Battery entered the market and began to be sold abroad. Under the market's validation, especially the development of electric vehicles in recent years, Huanyu Lithium Battery has truly achieved large-scale market entry at the end of 2010.

Recently, Chairman of the Foxconn Technology Group, Mr. Gou Mingming led a Foxconn Technology delegation to visit Huanyu and made it clear: â€œIâ€™ll give you money. You donâ€™t want to make money, donâ€™t scold the market. Our cooperation will build Xinxiang into the nationâ€™s largest battery base and agree to Holding hands, shaking hands with you is better than signing an agreement."

In addition, another breakthrough in the development of Huanyu is the equity incentive plan. .

On August 6, 2011, in the conference hall of the Universal Headquarters, the companyâ€™s 30 middle and senior managers and the chairman of the board of directors Li Zhongdong and President Cheng Zhijie signed the equity certificate, and the Universal Purchasing Equity Incentive Plan was formally implemented.

The total amount of options and futures available for allocation in equity incentives account for 10% of the total share capital, of which 7% is used for incentives for existing positions, and 3% is used as reserved shares for rewards for special contributions and important new additions in the future. The motivation of the job. The total amount of dry shares separately distributed in this option incentive plan is 10% of the total share capital to ensure that the incentive object can receive the company's annual bonus if it does not enjoy the benefit of the option spread.

As a company with a distinctive family color, Li Zhongdong stated that although there are some obstacles to the implementation of equity incentives, the measures favorable to the company will continue to be sustained.

Although there is a large amount of investment in the world and the full support of local governments, Li Middle East and his team did not dazzle.

Li Middle East said that Universalâ€™s goal is to establish a battery-based industry and become the top five lithium battery solution providers in the world. In addition to policy and financial support, science and technology are also very important.

The Middle Eastâ€™s confidence in the company stems from the emphasis on science and technology. Li Zhongdong introduced that in private battery companies, Huanyu is a company that attaches great importance to technological upgrading. In the absence of any state-owned scientific research institutions and state-owned enterprises, Huanyu built a state-level secondary battery postdoctoral workstation. â€

â€œToday, the Universal Office building on the east side of Huanyu Avenue is still more than a decade ago. The development and monitoring equipment for battery R&D cannot be said to be the strongest in China, but it is certainly the strongest in China. One of them. In the past few years, most of the money that the company has earned has been invested in the research and development of new technologies and the introduction of equipment. In the past few years, we have invested more than 600 million lithium batteries."

On the same day as the reporter interviewed, Huanyu had just sent a scientific research team to several European countries for a 10-day technical exchange visit.

According to Dong Linfu, marketing director of Beijing Universal Purcell New Energy Technology Co., Ltd., China's power lithium battery is divided into three groups, one is BYD, but BYD's technology is not clear in the industry. Another group is the Lei Tian Department. Lei Tian has established a joint venture with local governments to form a series of Solar Battery companies. The second one is Universal. This school is our original one. The electrolyte of Universal has almost no superfluous. After years of research, we have achieved standardization from hard packaging to later flexible packaging.

Li Middle East predicts that in the future, domestic lithium battery manufacturers will be close to 500, and with the continuous elimination of the last remaining real strength will be less than 10%.

â€œThe current overcapacity in the lithium power industry is the only way for the market, and it is the transition period for testing companies. Although Huanyu does not have strong capital, we are more focused on the best battery and more market awareness than other companies. Can be tested

For the company's initial plan, Li Zhongdong introduced that by the next year, the first phase of planning and construction of 100 acres for the production of lithium batteries, 400 acres of reserve land for all production will create a production base with annual sales of 5 billion yuan.