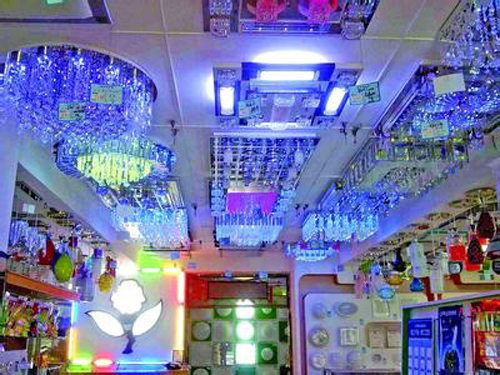 In 2014, for the lighting industry, it seems that it is a â€œeventful eventâ€. On the one hand, the good news of the â€œNobel Prizeâ€ has caused Internet companies such as Xiaomi, 360, and Ali to â€œcut across the borderâ€ into LED lighting. On the other hand, Zhongshan lighting companies frequently staged a "run door", let the LED looks like a big cake, but covered with a gray color. The LED industry has never been as uneasy as it is now.

In 2014, the industry was known as the "LED lighting" in the first year. Driven by the demand of the terminal lighting market, the demand for chips, packages, and even sapphire and equipment in the upper and middle reaches all showed rapid growth. The share of LED products and profitability of enterprises have improved compared with previous years. For example, in the semi-annual LED industry report card that was released in August, many companies achieved "pass" and "excellent" results in the first half of the year, and according to relevant data, In the first half of 2014, the export value of LED in China's energy-saving lamps increased by more than 30% year-on-year. Currently, there are three LED's for every 10 lamps in the market.

The good market prospects are like the moon in the sky, and all the practitioners are rushing towards it. Many non-LED companies have transformed and attempted to catch up with the â€œrich-rich express vehicleâ€ of LED lighting. But the result is often counterproductive, the car did not catch up, but also people "killed to death", and Zhongshan Lighting Company's "run the door", but this "falling dead" in the reality exposed a sparkle. The harder days are still behind.

LED lamps last longer than traditional incandescent and fluorescent lamps. Therefore, the superposition of traditional lighting and new markets will temporarily bring about high growth in LED lighting. However, when LED lamps complete the replacement of traditional lighting within three to five years, the growth rate of the LED lighting industry will inevitably decline. From the growth period to the stable period, the competition will be more intense in the next three to five years, and the industry will really come during the big reshuffle period. To. At that time, the "Running Doors," like lighting company owners such as Zhongshan Fengguang Legend and Chico Lighting, did not know how much to stage!

Behind the "Running Road Gate", it reflects the current problems of China's LED lighting industry. These issues are summarized in the following aspects:

1. Enter blindly. Faced with the feast of LED's that look beautiful, many companies blindly "transformed" and went all the way, but they lacked a sufficient understanding of LED products and believed that "as long as they can light, they can make light," and the end result is that The products produced are not grounded and have no core competitiveness. Such products, even if there are no better marketing methods, but once they return to the product itself, will become a cannon fodder in the final LED competition.

2. The capital chain breaks. Analysing the LED companies in these walks can be seen that these companies have widely promoted brands and channels on the occasion of a big market explosion. They want to take this opportunity to become bigger and stronger, but the action is too large and the input and output are not proportional. Coupled with the lack of understanding of the market, leading to long-term investment recovery period, or even difficult to recover, the capital chain break is an inevitable fact.

3. Lack of core technology. For the reason why business owners run, industry professionals analyzed: â€œThe market is actually good, but some companies do not have core technology, profits are inherently thin, and they have to fight brand strategy. They have little right to speak and visibility. The products have not been recognized by the market and it is difficult to maintain them. Enterprises do not use the cruel shuffle that belongs to the market, and companies without technology and core competitiveness will all be eliminated.â€ It is reported that the global patent core technology is mainly controlled by lighting giants such as OSRAM in Germany. Hands. China's tens of thousands of LED companies, only dozens of companies involved in chip and extension, chip and other core parts are highly dependent on imports. The lack of core competitiveness of Chinese LED companies, how to gain a foothold in this lighting battle?

4. Intense competition. Looking back at the development of the LED lighting industry, companies have constantly joined and companies continue to fall. Failure in this industry has long been nothing new. The most fundamental reason for bankruptcy is nothing but fierce competition. The development of the LED lighting industry has been accompanied by the bloody turmoil of the â€œprice war.â€ Large companies hope to continue to maintain their initiative in the market by transforming their scale advantages into price advantages; SMEs hope to use low prices as â€œheavy gunsâ€ "," Bombing the market. In addition, the Internet e-commerce has made this competition even more intense. Therefore, whether in the present or in the future, the fierce competition in the LED lighting industry will never stop, but will intensify.

In the face of the above problems, where is our solution?

1. Take the differentiated route to find the market. With the development of the industry, the classification is becoming more and more specialized, and doing fine, professional, and transparent has become a direction for many businesses. No single brand can be attractive to all consumers. Using differentiated competition, it is a great success that a large market in China can touch a subdivided consumer group. Therefore, the integration of existing resources, focusing on one area, with high-quality products, serving a stable consumer group, taking a differentiated development path, for LED lighting SMEs, is a way to survive.

2. Product Innovation. Lighting companies should develop corresponding product series according to different regional characteristics, and should be very clear about the main consumer groups of the products. Finally, they should cooperate with distributors to deeply plow the regional market, which is more reliable than the national spread of the net. Product innovation, on the one hand, must be closely related to the needs, and it is guided by the improvement of consumer satisfaction. On the other hand, it should contribute to the steady growth of the company. This product has a powerful explosive power and endurance.

3. Resource Integration. With the continuous development of LED technology, after the product and brand stage, it will certainly enter the stage of integration of capital and social resources. Some companies that want to become bigger and stronger are looking for investment and acquisition targets, and improve product quality and cost control capabilities through integration; The core technology companies are also looking for companies with dimming technologies, wireless control technologies, etc. to increase the added value of LED lighting products; some companies hope to join forces to develop domestic and foreign markets through integration. Therefore, the complementary advantages and resource sharing are the development trend of the future lighting industry, and it is also a strong support for the Chinese lighting industry based on the world.

Unlike other typical load cells they take their [S type" name from their shape, as you can see from the structure, although occasionally some people do prefer the term [Z type"


The capacities of the S type load cells we can offer vary from 25kg up to around 30 tonnes primarily using metal foil strain gauge technology. They are a successful choice for applications as they provide accuracy and have compact design features. Installation using rod ends or load buttons mean that S type load cells give excellent performance in both tension and compression applications.

S type load cells are very versatile and because of this they have many advantages;

Suited for both tension and compression applications

Available in both alloy and stainless steel options